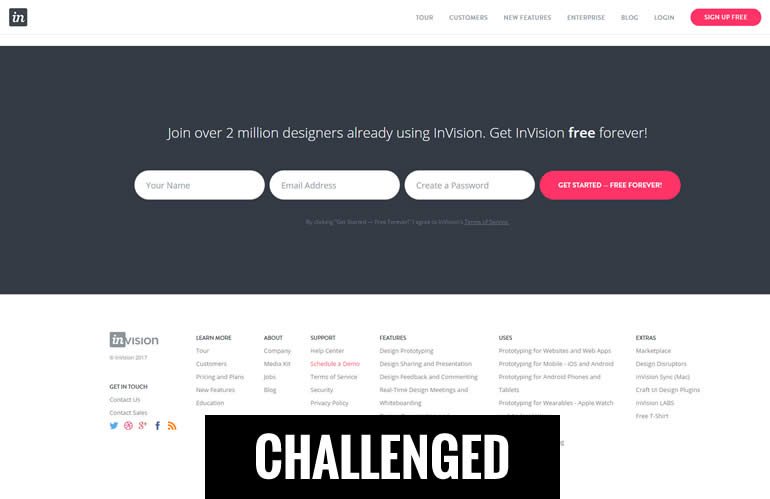 I think Invisionapp.com, an amazing collaboration platform for designers, can do a better job in terms of collecting more signups on their long homepage. I'm openly challenging the very bottom of their homepage which contains a set of horizontally aligned form fields. I think that the form fields could apply the Natural Language Forms pattern organizing them as sentences. More so, based on 6 observed tests using this pattern (with 4 positive results), I can also make an approximate effect guess of +7.6% more signups. There, I made a public prediction! Now will InVision test this? I hope so, since there is still so much to learn.

InVision Should Test This Pattern With These 3 Key Changes

Here is what I would change if I were to apply the Natural Language Forms pattern to InVision's homepage. The concept contains 3 key properties:

In order to gauge whether this pattern is successful or not I would setup the test as follows:

I really hope to influence InVision to test this concept and share the data with everyone in here so we can learn something about natural language forms. Here is what has happened so far:

Here Is Where You Come In

If you'd like to help and make this happen, nudge InVision a little to encourage some open experimentation. Here is a tweet link that you could use:

Tweet To InVision To Encourage Them To Test This

The Email That Closes Sales On CRO Projects